Perseus, the hero, arcs high overhead in fall and early winter. Many of its stars are immersed in the faint glow of our galaxy, the Milky Way. In fact, if you look at Perseus under dark skies, you may be able to see three of the spiral arms that enfold the Milky Way. 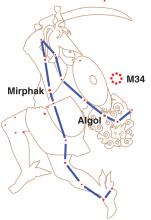 In classical Greek mythology, Perseus beheaded the snake-headed Medusa to save the princess Andromeda from a nasty sea monster. A few drops of Medusa's blood fell into the sea, mixed with the foam, and gave birth to Pegasus, the flying horse, who later played a part in the story of another hero, Bellerophon.

The constellation's brightest star, Alpha Persei, is a bit brighter than the North Star. It is moving through space with a large group of stars, known collectively as the Alpha Persei cluster. The cluster is only about 50 million years old, which is just one percent of the age of the Sun and Earth.

One of the brightest and most interesting stars in Perseus is Algol. The name Algol means "demon star." Ancient skywatchers thought it was cursed because its brightness changes. That's because Algol, which is about 75 light-years from Earth, is the most famous eclipsing binary star. Today, astronomers know that Algol is two separate stars. About once every three days, the fainter member of the pair passes in front of the brighter one, and Algol grows fainter.

A faint star cluster in Perseus, called M34 is visible with binoculars.

Perseus is also the "radiant" point of the Perseid meteor shower, which is visible every August. Although the meteors can streak across any part of the sky, if you trace their paths backwards they all appear to originate in Perseus. The shower is spawned by Comet Swift-Tuttle. As it orbits the Sun, this big "dirty snowball" sheds tiny grains of rock and dust. Over time, the particles spread out along the comet's orbital path. Earth flies through this path every August, sweeping up some of the dust grains. They plunge into our atmosphere at more than 100,000 miles per hour, vaporizing as the streaks of light known as meteors. 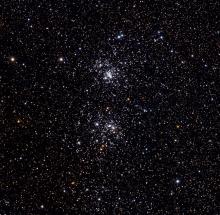