Pegasus is a large pattern of stars marked by a great square — four bright stars that form the body of the winged horse. 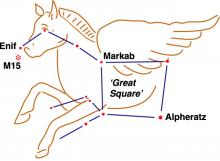 Pegasus is a character from Mediterranean mythology, although he's best known for a couple of myths that he wasn't part of -- those of Perseus and Hercules.

In classical Greek mythology, Perseus killed the snake-headed Medusa to save the princess Andromeda from a nasty sea monster. A few drops of Medusa's blood fell into the sea. When it mixed with the foam, it gave birth to Pegasus, who later played a part in the story of another hero, Bellerophon. In modern times, though, Pegasus has become a more integral part of the Perseus story. In recent tellings, when Perseus shows up to save Andromeda, he is riding Pegasus. And the tale of the flying horse became even more convoluted with Disney's animated version of Hercules, in which Herc and Pegasus are pals.

The brightest star in the constellation is Markab, which means "the saddle." It's at the southwestern corner of the Great Square.

At another corner is Beta Pegasi. "Beta" means it should be the second-brightest star in Pegasus, and sometimes it is. The star pulses in and out like a beating heart. When it pulses out, its surface cools, so it gets fainter. When it squeezes back in it gets hotter, so it glows brighter, making it Pegasus's brightest star.

Another star in Pegasus, II Pegasi, produced a monster flare a few years ago -- a powerful explosion on its surface that generated a torrent of energy and charged particles. The flare was 100 million times more powerful than a typical flare on the Sun. If Earth orbited II Pegasi, such a monster would obliterate the ozone layer and alter the climate, and probably kill much of the planet's life. The star's magnetic field may be energized by a nearby companion star, which causes II Pegasi to spin on its axis once every seven days (versus about 29 days for the Sun). This fast rotation may keep the star's internal layers in high-speed motion, generating a powerful magnetic field that produces flares and other storms.