OSIRIS-REx (Origins, Spectral Interpretation, Resource Identification, Security, Regolith Explorer) is a mission to the asteroid 101955 Bennu. It launched on September 8, 2016, and is scheduled to arrive at the asteroid in December 2018.

During its first month of operations, OSIRIS-REx will make several close passes by Bennu’s poles and equator. That will provide precise measurements of the asteroid’s mass and shape. After that, the craft will settle into orbit, beginning a long series of observations. The mission’s highlight will come in July 2020, when OSIRIS-REx is scheduled to scoop up a small sample from the surface for delivery to Earth three years later. 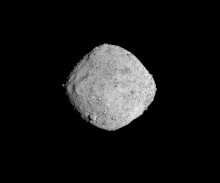 Getting ready for touchdown October 19, 2020