Orion is one of the most beautiful of all constellations, and one of the easiest to find. It looks like a large rectangle high in winter's south-southeastern sky. 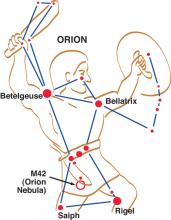 Two of the brightest stars in the evening sky lie at opposite corners of the rectangle: bright orange-red Betelgeuse at the northeastern corner and even brighter Rigel at the southwest.

Betelgeuse is is at least 300 times the Sun's diameter, and perhaps much more. It puts out about 100,000 times more energy than the Sun does. And when it dies, it will create a fireball that will briefly outshine billions of normal stars.

Betelgeuse is a red supergiant — the largest class of stars. It’s probably close to 20 times as massive as the Sun. The gravity of such a star squeezes its core tightly, heating it to billions of degrees. Such a stellar blast furnace consumes its original hydrogen fuel in a hurry, “fusing” the atoms together to make helium and producing incredible amounts of energy in the process. It then fuses the helium to make heavier elements — carbon and oxygen at first, and eventually all the way up to iron. When that happens, the star no longer produces energy in the core. Without the reactions in its core to push outward, gravity quickly causes the core to collapse, forming a neutron star. A massive explosion rips through the star’s outer layers, blasting them into space at a few percent of the speed of light — a titanic blast known as a supernova. We can’t be sure when that will happen to Betelgeuse, but it’s probably soon on the astronomical time scale: just about anytime in the next hundred thousand years.

Rigel is a blue supergiant. Like Betelgeuse, it is much bigger and heavier than the Sun. It's surface is thousands of degrees hotter, however, so it shines blue-white. That high temperature means that Rigel also pumps out a lot of ultraviolet energy, which produces sunburn and other problems. When you add up the ultraviolet, visible light, and other wavelengths, Rigel shines tens of thousands of times brighter than the Sun. In fact, depending on Rigel's exact distance, it could be up to 100,000  times brighter than the Sun.

With so much energy streaming its way, a planet would need to be billions of miles away from Rigel to be a safe abode for life, and it would need a thick ozone layer to screen out the ultraviolet. Even then, such a planet wouldn't be a good long-term home. In a few million years, Rigel, too, is likely to blast itself to bits as a supernova. The energy and shock wave would make quick work of life on any world around it. 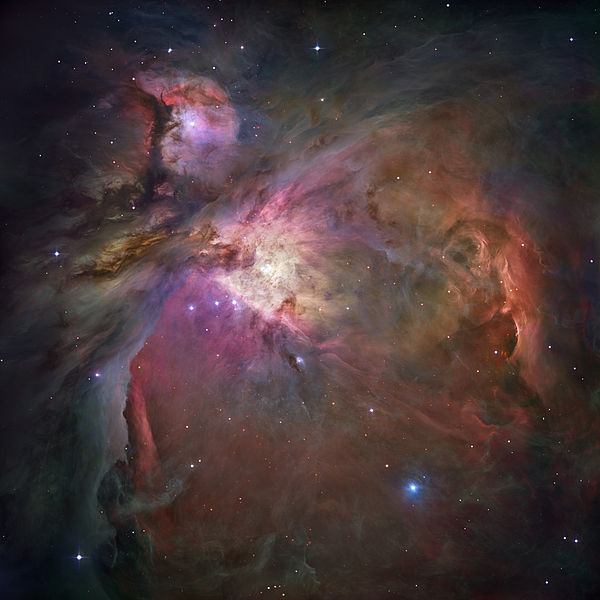 Hubble Space Telescope view of M42 [NASA/ESA]One of the objects in the sword isn't a star at all. It's M42, the Orion Nebula, which is a cloud of gas and dust that's like a giant fluorescent bulb.

M42 is part of a giant complex of clouds of interstellar gas and dust. Pockets of this material are collapsing to give birth to new stars. Hubble Space Telescope images reveal about 3,000 stars in the Orion Nebula alone, some of which could be as little as 10,000 years old.

The visible nebula is a bubble of turbulent gas that is energized by the Trapezium, a cluster of hot, bright stars at its center. Ultraviolet energy from the stars strips electrons from atoms in the nebula. When the electrons link up with new atoms, the atoms emit light.

The process of starbirth continues today, with several hundred dense blobs of gas and dust collapsing to make new stars. In addition, planetary systems appear to be taking shape around many of the newborn stars. Not all of them will survive the birth process, though, because radiation from the cluster's hot young stars is eroding the planet-making materials around many of the stars.