A reaction that involves two atomic nuclei merging to create the nucleus of a new atom. The reaction is accompanied by a tremendous release of energy. The Sun’s energy, as with all stars, comes from nuclear fusion reactions that happen in its core. The reactions fuse hydrogen nuclei into helium nuclei. About 0.7 percent of the mass of the hydrogen is converted to energy, which makes the star shine. 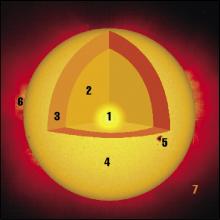 Stellar siblings with different futures May 21, 2021

Life of the Sun

Zipping through the universe November 8, 2017

The beginning of the end for a bright star October 8, 2017

Making elements in the hearts of stars March 7, 2017 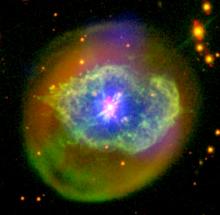