Building on the success of the 1997 Sojourner rover, the Spirit and Opportunity rovers landed on Mars in 2004. Although their planned mission was just 90 Mars days long (about 92 Earth days), Spirit continued until March 2010, while Opportunity was still operating in 2011. Both found evidence that water had helped shape the Martian landscape in the distant past.

Mars and the Pleiades 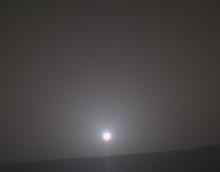