Mars has two small moons, Phobos and Deimos. Phobos is the larger of the two. It is shaped like a potato, about 15 miles long by 10 miles wide. One end is scarred by a giant crater. The impact that created it may have fractured the entire moon, leaving big cracks that travel from one end to the other. Phobos is in such a low orbit that it circles Mars about three times per day. It rises in the west, then sets in the east just a few hours later. As seen from the equator it looks less than half as big as our Moon looks from Earth. Deimos is both smaller and farther out. It takes almost three days to complete one orbit. From the Martian surface, it looks about like Venus looks from Earth. 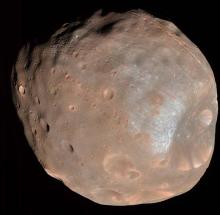 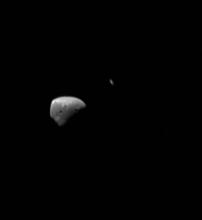 Making moons over and over again November 14, 2017