It's easy to find Lyra, the harp, by first finding Vega — one of the brightest stars in Earth's night sky. Look for Vega high overhead in mid-summer. Lyra looks like a small, lopsided square, with Vega just beside one of the corners of the square. 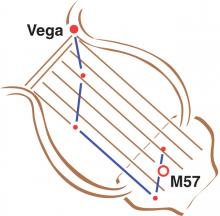 The legend of Lyra tells the story of Orpheus, who was given a harp by the god Apollo. Orpheus' music was sweeter than that of any other mortal man. It could soothe any savage, bring joy to the heart of the weary. It was even said that rivers changed course to stay near its beauty.

Orpheus married the lovely maiden Eurydice. But after their wedding, as she walked with her bridesmaids, she was bitten by a snake and died.

Orpheus was so stricken with grief that he journeyed to the underworld to win her return. His music not only gained him entry to Hades, it caused Pluto, the god of the underworld, to soften his heart and grant Orpheus' wish. But there was one condition: Eurydice would follow Orpheus, who could not look back until both had gained the upper world. Orpheus followed his instructions -- until he reached the surface. Before Eurydice could take the final steps into the light, he turned to gaze upon her. She vanished, with only one word to her love: Farewell.

Crazed with grief, Orpheus wandered the hills of Greece until he was murdered. The Muses buried him, and Apollo placed his magical harp in the sky -- as Lyra.

Lyra's leading light, Vega, is only about 25 light-years away, making it one of our closest neighbors. It shines pure white, which tells us that its surface is thousands of degrees hotter than the surface of the Sun.

Models of how stars age indicate that, like the Sun, Vega is about halfway through its "normal" lifetime -- the time when it fuses the hydrogen atoms in its core to make helium. But stellar lifetimes aren't all the same. Vega is probably around one-tenth the age of the Sun, so it has only a few hundred million years to go, versus billions of years for the Sun.

The difference is the mass of the two stars. Vega is more than twice as heavy as the Sun, so it burns through its hydrogen much faster than the Sun does. So Vega will finish its hydrogen, puff up to become a red giant, blow its outer layers off into space, and fade into obscurity as a white dwarf -- all while the Sun continues to shine much as it does today.

The constellation's second-brightest star, Beta Lyrae, stands a bit to the south of Vega.

Beta Lyrae is a binary, so it consists of two stars locked in a mutual orbit around each other. Both stars are larger, hotter, and brighter than the Sun. One star is blue, and the other is white. The stars are so close together that each star's gravity has distorted the other, making them look like eggs.

The two stars are so close together that they orbit each other once every 13 days. And during every orbit, one star passes in front of the other as seen from Earth, blocking its light. You can even see these eclipses with just your eyes. Just compare Beta Lyrae's brightness to that of Gamma Lyrae, the star that's next to it. Normally, they're the same brightness. But during an eclipse, Beta looks fainter, because you are seeing the light of only one star instead of two.

Lyra hosts the "radiant" for the Lyrid meteor shower, which peaks each April. That means that if you trace their paths back across the sky, the meteors all appears to "rain" into Earth's atmosphere from the direction of Lyra.