The Milky Way galaxy is part of a larger cosmic neighborhood -- a collection of dozens of galaxies known as the Local Group. 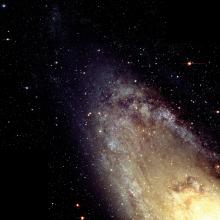 These galaxies move through space as a single unit, bound together by their mutual gravitational pull.

The number of galaxies in the Local Group is uncertain because astronomers keep finding new residents of this galactic neighborhood. Most of the newer members are small and faint, and some are hidden behind the glowing veil of the Milky Way.

The largest and heaviest members of the Local Group are the Milky Way and the Andromeda galaxy, M31, which is about 2.5 million light-years away. In other words, when we see M31, we're actually seeing it as it appeared more than two million years ago.

Andromeda is a wonderful laboratory for astronomers who study everything from gas clouds to black holes. It looms so large in our sky that big telescopes reveal many of its individual stars. Yet it's far enough that we can see the entire galaxy, allowing astronomers to study its overall structure and composition.

The Milky Way, which may be a little smaller but more massive than M31, has a large collection of satellite galaxies -- perhaps a dozen or more. The largest and best known are the Large and Small Magellanic Clouds, which are visible from the southern hemisphere. Both are less than 200,000 light-years away.

What is the nearest galaxy?

The Milky Way's closest satellite is a small galaxy in the constellation Sagittarius, approximately 100,000 light-years distant. It lies "behind" the center of the Milky Way as seen from Earth, so it is hard to see. It was only discovered in 1994. The Milky Way is devouring this galaxy, so someday it will lose its identity as its stars join the larger Milky Way. When this happens, the title of "nearest galactic neighbor" will once again fall on the Large Magellanic Cloud, an irregular galaxy located a mere 160,000 light-years away.

Models of how galaxies behave suggest that the Milky Way has probably swallowed many smaller galaxies during its lifetime. And several billion years from now, the Milky Way and Andromeda may merge to form a galactic giant.