Gemini is easy to find as it glides high overhead in mid-winter, above and to the left of Orion. Its two brightest stars, Castor and Pollux, represent the mythological twin brothers of Helen of Troy. 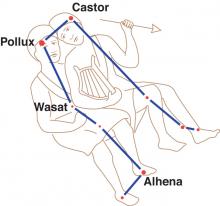 Many cultures have seen two humans in this star pattern, which consists of two roughly parallel lines of stars capped by two of the brightest stars in the night sky. But the legend that endures is that of Castor and Pollux. Gemini's two brightest stars bear the names of the twins.

According to the most common version of theirstory, the queen of Sparta gave birth to two sets of twins, with one boy and one girl in each pair. One set was fathered by her husband, the other by Zeus, king of the gods. The four children were raised together, and the two boys -- one mortal, the other immortal -- were inseparable. They had many adventures, and joined Jason and the other Argonauts in the search for the golden fleece.

But during a fight with some landowners, the mortal Castor was killed. Pollux was inconsolable, and eventually begged Zeus to allow him to die so he could join Castor. Moved by Pollux's love for his brother, Zeus agreed to keep them together for eternity. They spend half of their time in the underworld, the other half in the heavens, where they are represented by the stars of Gemini.

Pollux is the brighter of the twins. The orange-giant star is about 35 light-years from Earth. At least one planet orbits the star. It is at least three times as massive as Jupiter, and it orbits Pollux once every 1.6 years.

Castor consists of six stars. This crowded system lies about 50 light-years from Earth. All six stars in the system really are related, because they were born from a single giant cloud of gas and dust, probably around 200 million years ago.

Two pairs of Castor's twins are more fraternal than identical. One star in each pair is a good bit bigger, brighter, and heavier than the Sun, while the other star in each pair is smaller, fainter, and less massive than the Sun. The stars in each of these pairs are so close together that they orbit each other in just a few days. At such close range, there's no way for telescopes to see them as individual stars. Instead, special instruments separate the "fingerprints" of the stars as they go around each other, providing details on each star.

The third set of Castor twins is identical. Each star is smaller, cooler, and less massive than the Sun, and much fainter. And while the other two sets of twins are relatively close to each other, these "twins" are so far away that it takes thousands of years to orbit the others. 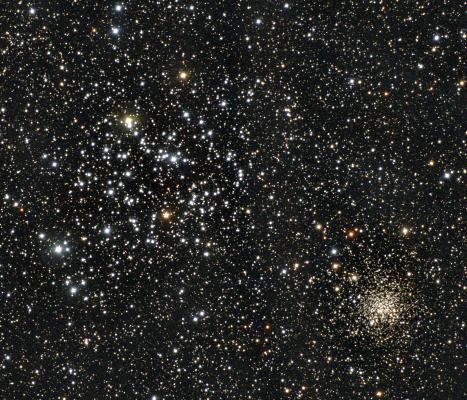 M35 in Gemini [NOAO/AURA/NSF]The star cluster M35 stands near the feet of the twins. It is about 2,800 light-years away, and it contains a couple of thousand stars. Astronomers estimate that the cluster is about 150 million years old. That's  long enough for many of the cluster's original stars to have been pulled away by the gravity of the rest of the galaxy. But M35's remaining stars are bound together so strongly by their mutual gravitational pull that they're likely to stay together for a long time.

M35's stars all started with roughly the same amounts of hydrogen, helium, and other elements. By studying how much of these elements the stars have today, astronomers learn a great deal about how stars evolve. The cluster's hottest, heaviest stars have already expired. Some may have blasted themselves to bits, while others cast their outer layers into space in a more gentle process, leaving behind their hot, dense cores.

The constellation is home to the Geminid meteor shower, which peaks in mid-December. If you trace their paths across the sky, the meteors all point back toward Gemini.