Eventually, the stars of the Milky Way will burn out as will the stars in other galaxies sprinkled through the universe. 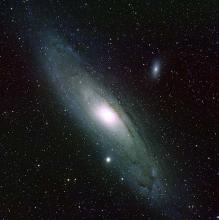 On the human time scale, the Milky Way galaxy is eternal. The starry Milky Way shined down on the first humans and will continue to shine on Earth for billions of years more. Eventually, though, the stars of the Milky Way will burn out. The galaxy will remain, but it will no longer look like a bright pinwheel. In fact, it won't look like much of anything at all -- and neither will the other galaxies sprinkled through the universe.

Astronomers aren't sure exactly how the universe will end. But current observations suggest that "dark energy" is causing the universe to expand faster, driving galaxies farther apart. If that's correct, then galaxies will gradually fade from sight as their stars burn out.

The nuclear fires of stars like the Sun will be extinguished in a few billion years. The Sun itself will live for another five billion years or more.

The smallest stars consume their fuel much more slowly than bigger stars like the Sun, so they will live for a few trillion years -- thousands of times longer than the current age of the universe.

After the stars wink out, all that will remain of them will be crushed corpses. Gravity itself may weaken, so these stellar remnants may lose their planets.

Once every million billion years or so, a small new star may ignite as the result of a collision between two "brown dwarfs" -- objects that were not heavy enough to become stars on their own.

Later still, the Milky Way and all the other galaxies will lose their grip on their dead stars. Some of the stars will sail off into space, while others will fall into the giant black holes that will dominate the hearts of all the galaxies.

Eventually, the dead stars will disintegrate, and black holes as heavy as galaxies may evaporate in flashes of energy. The universe will contain only a thin mixture of radiation and subatomic particles swimming through the darkness.

Yet even then, long after the galactic cities of stars have disbanded and disappeared, the universe will go on.