Astronomers have discovered far more planets outside our solar system, known as extrasolar planets, than within it. Astronomers can not only detect a planet's presence, they can deduce a lower limit to its mass and distance from its parent star, and the length of its year. 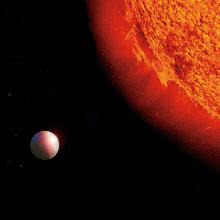 How do astronomers find planets outside our solar system?

The most successful search method used to date is called the transit method. If a planet passes directly between a star and the observer, it blocks out a tiny portion of the star's light. Using this technique, the Kepler space telescope has discovered thousands of confirmed or suspected exoplanets, while ground-based transit searches have found hundreds more.

The next-most successful method uses a technique called radial velocity. As a star is tugged to and fro by a planet's gravitational pull, astronomers measure a slight shift in the frequency of the star’s light.

Astrometry is another detection method. It is sometimes called positional astronomy. Astronomers measure a tiny shift in a star's position on the sky caused by the gravitational pull of a planet. They can use this information to calculate the planet's mass and orbit.

A fourth detection method, called gravitational microlensing, comes from one of Einstein's insights in his theory of general relativity: Gravity bends space. When a planet passes in front of a more-distant star, the planet's gravity will behave like a lens to temporarily focus light from the star. This should cause a sharp increase in brightness and a change in the apparent position of the star.

Most of the planets discovered outside our own solar system are at least as massive as Jupiter, the solar system's giant.

As searchers continue, however, many smaller planets have been discovered, including some that are only a bit bigger and heavier than Earth. Some of those planets like in the habitable zone, which is the distance from a star where temperatures are right for liquid water, a necessary ingredient for life.