Explorations of the Inner Solar System

The Soviet Union's Luna 3 solved an ancient mystery in 1959 when it snapped the first pictures of the far side of the Moon (below). The images showed a hemisphere with plenty of craters and jumbled mountains, but few of the dark volcanic plains that are visible on the side that faces Earth. Later, Luna 9 made the first soft landing on the Moon, while Luna 10 became the first craft to enter lunar orbit. 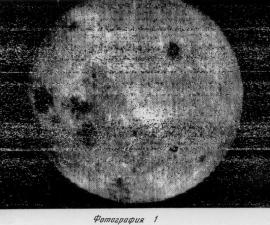 Lunar farside, 1959In 1962, the American Mariner 2 staged the first successful encounter with another planet when it flew past Venus. Its instruments recorded Venus' surface temperature and pressure, and the composition of its atmosphere and the clouds that envelope the planet. The next successful mission in the series, Mariner 4, snapped the first close-range pictures of Mars in 1965. The images revealed a Moon-like landscape.

E. Aldrin on the MoonSurveyor 1 snapped more than 10,000 pictures after it became the first American probe to land on the Moon, in 1966. Apollo 11 astronauts Neil Armstrong and Edwin Aldrin made the first manned landing on July 20, 1969, and five more landings followed. The more than 800 pounds of lunar rocks and soil they collected helped scientists learn about the Moon's birth, evolution, and composition.

Mariner 10 view of MercuryOnly two spacecraft have visited Mercury. Mariner 10 flew by the planet three times in 1974 and 1975, and mapped about half of its Moon-like surface, which is dominated by impact craters. Mariner found that Mercury's interior consists of a large iron-rich core, which generates a weak magnetic field. Messenger flew by Mercury three times, then entered orbit around the planet in March 2011.

Rocks around Venera 9 landerThe Soviet Venera 9 became the first spacecraft to transmit pictures from the surface of another planet when it touched down on Venus in 1975. And in a mission that began 15 years later, the American Magellan used cloud-penetrating radar to map more than 98 percent of Venus' surface. Its images revealed hundreds of volcanoes, giant lava flows, cracked domes of volcanic rock, and long canyons.

Viking view of MarsIn 1976, Viking 1 and 2 became the first spacecraft to land safely on Mars. From opposite sides of Mars, they photographed and analyzed their environments, finding a surface of iron-rich clay and an atmosphere battered by giant dust storms. Experiments designed to look for signs of life produced mixed results, which scientists interpreted as meaning the surface is sterile.

Artist's concept of rover on MarsBuilding on the success of the 1997 Sojourner rover, the Spirit and Opportunity rovers landed on Mars in 2003. Although their planned mission was just three months, Spirit continued operating until March 2010, while Opportunity was still going at the end of the year. Both found evidence that water had helped shape the Martian landscape in the distant past. Several American and European craft found similar evidence from orbit. 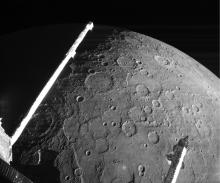