As the list of known planets beyond the solar system grows, it seems increasingly likely that many billions of planets inhabit the Milky Way. Most of the planets discovered so far are unlikely homes for life as we know it. But planets that are more like our own Earth are beginning to turn up, giving new energy to the search for life among the stars. 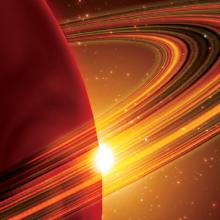 Are we alone in the universe?

This question has captured the imaginations of scientists, theologians, and philosophers for millennia. And while we don't know the answer yet, we do know that our solar system is not unique.

Current theories of how planets are born indicate that planet formation is a natural and almost necessary result of the process of star formation. There are billions of stars similar to our Sun in our own galaxy. How many of these other stars host planetary systems? And how many of these planets might harbor life? Such questions have motivated astronomers to conduct many searches for extrasolar planetary systems over the past decade. These searches have discovered hundreds of planets orbiting nearby Sun-like stars, as well as a large number of intriguing puzzles.

Detecting extrasolar planets is not simply a matter of aiming a telescope at nearby stars and taking pictures. The amount of light from a planet is minuscule compared to the amount of light from its parent star. Seen in optical wavelengths (the kind our eyes can detect), a typical star is about a billion times brighter than its planets.

So instead of trying to detect planets directly, most astronomers take advantage of the fact that the star and planet both orbit an imaginary point between them called the center of gravity. Astronomers deduce the planet's presence by observing the tell-tale signs that the star is orbiting a center of gravity. Either they watch the star change position with respect to background stars (called the astrometry method), or they measure the change in the line-of-sight speed of the star as it orbits (called the radial velocity method). Another technique looks for transits -- a tiny drop in a star's light caused by a planet passing directly between Earth and the star.

The transit technique, which was used by the orbiting Kepler space telescope, has been by far the most successful. Kepler alone has discovered thousands of confirmed planets, with thousands more awaiting confirmation by ground-based telescopes.

In 1992, NASA launched a search for extraterrestrial intelligence — an effort to detect radio waves from other civilizations. The project lasted only a few months, but it soon rose from the ashes — this time sponsored by the privately funded SETI Institute.

Project Phoenix scanned its first star in 1994. It started at a radio telescope in Australia, then moved to West Virginia, and finally to the world’s largest single-dish radio telescope, in Puerto Rico. In all, Phoenix scanned about 800 stars within 250 light-years of Earth. All the target stars were considered relatively hospitable systems for life. The stars are the right type and age, and many of them have confirmed planets. One sentimental target was Altair, which is about 17 light-years away in the constellation Aquila, the eagle. The star was the setting for Forbidden Planet, a popular 1950s movie in which explorers from Earth find the fantastic remains of a dead civilization.

The Phoenix receivers scanned millions of radio frequencies, hoping to find either a steady signal or one that repeated at regular intervals. The detectors were sensitive enough to pick up any signal as powerful as a military radar here on Earth. Interesting signals were followed up with additional observations.

None of the interesting signals panned out. But today, scientists are conducting a more sensitive search using giant radio telescopes in West Virginia, Australia, and elsewhere, along with searches at optical wavelengths.