Energy: Tools of the Trade

From radio waves to visible light to X-rays, different forms of energy tell different parts of the story of planets, stars, and galaxies. Astronomers use telescopes and sensitive detectors on the ground and in space to study them all. 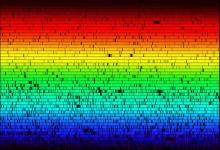 When we look at a rainbow, we see sunlight spread out into red, orange, yellow, green, blue, and violet. But this familiar palette of colors represents just a small part of a much larger "spectrum" of energy, which includes radio waves, X-rays, and many other kinds of energy that our eyes cannot see. Over the past century, using new types of telescopes that can detect these previously invisible waves, astronomers have discovered a wide variety of new objects and gained important new insights into the workings of the universe.

Scientists have pondered the nature of light for hundreds of years. Physics experiments in the 19th century showed that light behaves like a wave, similar to sound waves or ocean waves. (Light also sometimes acts like a stream of tiny particles, called photons.) Further research found that radio transmissions travel at the same speed as light, and have many other properties in common, suggesting that radio and light are different examples of the same basic phenomenon: electromagnetic waves. These waves consist of synchronized ripples in magnetic fields (as from an ordinary magnet) and electric fields (like the static electricity that makes your hair stick to a balloon), which intertwine and reinforce each other as they move.

Eventually, astronomers realized that many other sorts of "waves" and "rays" are also electromagnetic waves, and differ from light and radio only in terms of their wavelength. Depending on the type of wave, its wavelength can be relatively large or very small. The wavelength of an AM radio wave is about 300 meters (one-fifth of a mile), while the X-rays emitted by a dentist's X-ray machine might have a wavelength of only a nanometer (one billionth of a meter). Scientists divide this enormous range into several sections. From longest waves to shortest, these include radio waves (including AM, FM, and television), microwaves, infrared (sometimes called heat radiation), visible light, ultraviolet, X-rays, and gamma rays (which are smaller than an atom!).

All these types of electromagnetic waves are fundamentally similar, but they are created under different conditions and interact with matter in different ways. Special telescopes and sensors allow astronomers to see at these wavelengths, and thus gain a whole new viewpoint on the universe.

For example, the Two-Micron All-Sky Survey, which uses infrared cameras, has discovered many nearby "brown dwarfs" -- failed stars that are dark at visible wavelengths but are warm enough to glow in the infrared. Radio images from the Very Large Array radio telescope in New Mexico reveal "jets" of high-speed electrons from otherwise ordinary-looking galaxies, providing valuable clues about what's going on in the centers of these galaxies. And the orbiting Chandra X-Ray Observatory, looking toward the center of the Milky Way, has found hundreds of super-hot collapsed stars, which previously were hidden behind thick dust clouds.

The ability to see all these different electromagnetic waves has helped astronomy enter a "golden age." As radio telescopes, infrared sensors, and X-ray cameras become more sensitive and more capable, we can expect even more discoveries. By using all the colors of the electromagnetic rainbow, we get a more complete view of the universe.