In the universe, what you see is certainly not what you get. 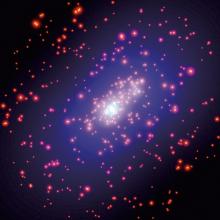 All of the stars, galaxies, and nebulae seen by telescopes make up only four percent of the contents of the universe. Scientists are unsure about the nature of the rest.

A large part of our universe is made up of so-called "dark matter," which emits no detectable energy, such as visible light, X-rays, or radio waves. However, it reveals itself by its gravity, just like a magnet underneath a table betrays its presence by attracting paperclips and pins.

The mystery of dark matter is more than 70 years old. In 1933, Fritz Zwicky studied the motions of galaxies in the Coma cluster and found that the galaxies were moving around much too fast. The cluster is flying apart, unless it's much more massive than it appears. One year earlier, Jan Oort studied the motions of stars in the Milky Way, and used similar arguments to conclude that our galaxy contains more mass than meets the eye.

In the late 1970s, Vera Rubin and Kent Ford announced the results of their pioneering studies of distant spiral galaxies. The outer regions of every galaxy they observed rotated so fast that there was one inescapable conclusion: Galaxies are embedded in extended "halos" of dark matter.

Why does fast rotation imply the presence of dark matter? Think about the solar system. Since most of the mass is in the Sun, which sits in the center of the system, Mercury's orbital speed is much higher than Pluto's.

Likewise, if most of a galaxy's mass is concentrated in its core (where most of the light comes from), you would expect stars and gas clouds to orbit slower with increasing distance from the core. This happens out to a certain distance. But past that point, orbital speeds of stars and gas clouds remain almost constant at increasing distances from the core. This can be explained only if there's a lot of invisible mass outside their orbits. Rubin and Ford concluded that the universe must contain about 10 times more dark matter than ordinary "luminous" matter.

Some of the dark matter consists of ordinary, or "baryonic" matter (matter consisting of protons and neutrons) that simply does not give off energy. Candidates include tenuous gas clouds, remnants of dead stars, or primordial black holes. But this is just the tip of the dark-matter iceberg: the amount of strange dark matter -- new types of elementary particles -- may be almost 10 times as large.

There's a simple reason why astronomers are so interested in dark matter. The mass of the universe determines its fate. The universe began expanding at the Big Bang, and is still expanding today. If the visible mass were all the mass in the universe, the universe would expand forever. However, the gravity of large amounts of dark matter might stop the expansion and cause the universe to contract, causing it to end in a "Big Crunch."

Recent observations of distant stellar explosions seem to indicate that the Big Crunch is not in our future. In fact, the expansion of the universe is speeding up, goaded by a mysterious "dark energy."

Most dark-matter searches have focused on our galaxy's halo -- a sphere around the flat, main disk, like the halo seen in blue around the edge-on spiral galaxy NGC 4631. Suppose it harbors a large amount of dark matter that consists of normal atoms (called "baryonic" dark matter). It may be locked up in small, cold bodies, like dead stars, cool brown dwarfs, rogue planets, or maybe even small black holes. These hypothetical bodies are called MACHOs, for MAssive Compact Halo Objects.

The nature of the "non-baryonic" dark matter -- dark matter not made of normal atoms -- is more mysterious. It may consist of particles that rarely or never interact with normal matter, except through gravity. Astronomers call this non-baryonic dark matter WIMPs -- Weakly Interacting Massive Particles.