The brightest stars of Cygnus form a cross, so the swan is also known as the Northern Cross. Find it soaring high overhead during late summer evenings. 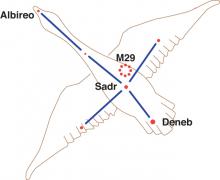 The constellation's brightest star is Deneb — an Arabic word that means "the tail." Deneb represents the tail of the swan but the top of the cross. The swan's outstretched wings form the horizontal bar of the cross, while the head of the swan, a double star called Albireo, is at the bottom of the cross.

Although it lies about 1,500 light-years from Earth, Deneb shines brightly in our night sky because it's a white supergiant — a star that's much larger, hotter, and brighter than the Sun. Deneb is the northeastern point of a star pattern called the Summer Triangle.

If you use binoculars to scan the area between the two bright stars that define the swan's eastern wing, you'll see the remnant of a supernova — a faint, incomplete ring of light called the Cygnus Loop.