The stars that "twinkle, twinkle" in the night sky are just a few of the countless trillions of glowing orbs that illuminate the universe. Stars come in many sizes, colors, and ages. Some live short, fast, brilliant lives, while others putter along as faint cosmic embers. Some will blast themselves to bits, some will just fade away, and some will collapse to form black holes. All of them will continue to inspire poets and scientists alike.

One of the great mysteries of the ancient world was the nature of the stars. As people watched these twinkling lights wheel across the sky night after night, year after year, they thought of them as the eyes or souls of the dead, as candles flickering against a tall background, or as holes in the dome of the sky that allowed the light of heaven to shine through.

Modern science tells us that stars are gigantic balls of hot gas that shine because they produce nuclear reactions in their cores. Yet the scientific explanation does little to detract from the feeling of awe that a night of stargazing inspires.

How are stars born?

Stars are born from vast clouds of gas and dust. Perhaps nudged by the shockwave of an exploding star or some other event, a cloud collapses under its own gravity. When the cloud reaches a critical density, it gets hot enough to trigger nuclear fusion -- a process that combines lightweight atoms to create heavier ones, releasing vast amounts of energy. In most stars, such as the Sun, hydrogen atoms combine to make helium. 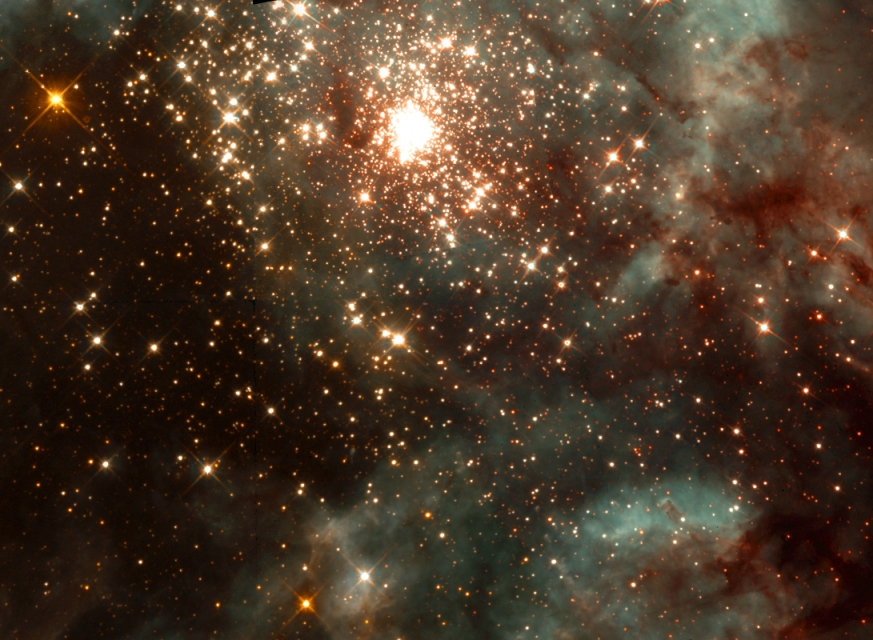 Late in its life, though, the star can create other chemical elements, including oxygen, nitrogen, and carbon, which are essential for life. In fact, almost all of the elements in the universe other than hydrogen and helium were forged in the hearts of stars or in the violent processes that can end a star's life. When a star dies, it expels these materials into space, where they can form new stars, planets, and people. So the elements on Earth -- from the oxygen we breathe to the iron in our blood -- came from the stars.

A star's life history is regulated by its mass.

The smallest stars are less than one-tenth as massive as the Sun. The nuclear reactions in their cores take place at a slower rate, so the stars will live for hundreds of billions of years or longer. These stars are cool and faint, though, so they shine as dull red cosmic embers.

Medium-mass stars like the Sun shine for several billion years. These stars are relatively hot, so their surfaces shine yellow or white. At the end, such a star puffs up like a beachball, then casts its outer layers into space to form a colorful bubble called a planetary nebula. When the nebula dissipates, it leaves behind a hot, dense, dead core, known as a white dwarf.

The most-massive stars, which can be more 200 times as heavy as the Sun, live short, spectacular lives. Their great heft squeezes their interiors, making them extremely hot, so they consume their nuclear fuel in a hurry. They can be millions of times brighter than the Sun, and their diameters can be hundreds of times larger. These stars will die in titanic explosions called supernovae. Such a blast leaves behind either an ultra-dense neutron star or an even denser black hole.

Even with our modern understanding of stars, though, many mysteries remain. Astronomers continue to study this dazzling array of cosmic lights for answers.

Stars produce their energy through nuclear fusion. For most stars, this process is dominated by a process called the proton-proton chain, a sequence of events that transforms four hydrogen atoms into one helium atom. The proton-proton chain reaction fuels most stars and provides them with the energy required to support their enormous masses for most of their lifetimes; indeed, it is the source of our own Sun's power.

Larger stars, whose crushing weight generates even higher temperatures at their cores, use a more complex fusion process called the CNO cycle. In this reaction, trace amounts of carbon, nitrogen, and oxygen serve as catalysts in fusing four hydrogen atoms into one helium atom. While this method yields more energy, the higher temperatures required can be achieved only by stars that are more massive than the Sun, and such stars are doomed by their prolific output to live short lives.

What is the difference between luminosity and brightness?

Luminosity is not the same as brightness. Luminosity is a measure of the intrinsic brightness of a star or other object, while brightness measures how bright it looks to an observer. A 100-watt light bulb has a constant luminosity, for example, but can appear brighter or fainter depending on how far away it is. A dim star may be dim because it is small, cool, far away, or all three.