The largest known asteroid, Ceres is less than 600 miles (975 km) in diameter, and orbits roughly 260 million miles (420 million km) from the Sun. Italian astronomer Giuseppe Piazzi discovered Ceres in 1801. Since it was the first asteroid ever discovered, it also carries the designation “1 Ceres.” In 2006, astronomers also classified Ceres as a dwarf planet.

Watery features on a giant asteroid May 2, 2017 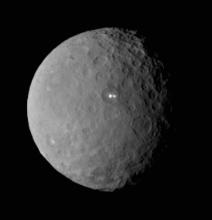