The mythological queen Cassiopeia floats overhead in fall and winter. 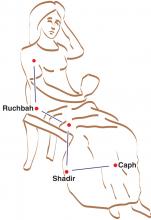 The best time to see her is in late fall, when she stands high in the northeastern sky during the evening hours. Cassiopeia looks like a flattened "W" against the frothy background of our home galaxy, the Milky Way.

Gamma Cassiopeia is the star at the middle of the W. If you add up all of its energy -- not just the light that is visible to the eye -- it shines about 40,000 times brighter than the Sun. That's because Gamma Cas is about 15 times as massive as the Sun and hundreds of times wider. Such a monster produces a lot of energy through the nuclear reactions in its core. That energy works its way to the surface and shines into space as visible light, ultraviolet, and other forms of electromagnetic energy. Eventually, the star will no longer be able to produce energy in its core, causing the core to collapse and its outer layers to explode as a supernova. For a few days or weeks, it will outshine everything in the night sky except the Moon.

Another of the constellation's stars, Rho Cassiopeia, is also destined to explode as a supernova. It is about 10,000 light-years away, making it one of the most distant stars that is visible to the unaided eye.

Rho Cas, which is to the right of Cassiopeia's W, is far bigger and more massive than the Sun and at least a half-million times brighter. It may be just about as bright as a star can get without blowing itself apart. Actually, Rho Cas is in the process of doing just that. Three times in the last six decades, it has blasted shells of gas into space. The most recent expelled 20 times more material than is contained in all of the planets and moons of our solar system combined. The star could be building up to another eruption soon.

Cassiopeia has produced two supernovae in recent centuries. One of those, known today as Cassiopeia A, exploded about three centuries ago as seen from Earth. It blasted its outer layers into space at a few percent of the speed of light. This material continues to expand into space as a giant shell. It contains lots of oxygen and other elements that will disperse into the galaxy. These elements may someday be incorporated into new stars, planets, or even living organisms.

In addition to dead stars and stars that are about to die, Cassiopeia is also home to one of the largest collections of young stars in the galaxy. A few years ago, astronomers discovered a tight cluster of several very young, hot, massive stars there. The stars are similar to the brightest stars of the Orion Nebula, which is the largest stellar nursery in our region of the galaxy. Today, the stars in the Cassiopeia nebula are hidden inside a dense cloud of dust. But over the next hundred thousand years or so, the radiation and winds from these stars will eat through the dust, allowing future skywatchers to see the many other stars that have been born there.