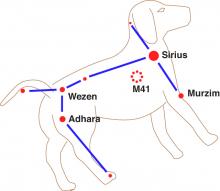 The brightest star in Canis Major also is the brightest in the entire night sky — brilliant Sirius, which is just 8.6 light-years away. That's only twice as far as our closest stellar neighbor. Because it is the brightest star of the Great Dog, Sirius is known as the Dog Star. Its first appearance in the dawn sky in August heralds the "dog days" of summer.

Sirius is actually a double star. The star that we see as Sirius is about 20 times brighter than the Sun. It is also hotter and more massive than the Sun. Its companion is known as Sirius B, and is nicknamed The Pup. It is a white dwarf -- the hot, dense core of a star that was once like Sirius itself. At the end of its life, the star blew its outer layers into space, leaving only the core. Sirius B is as massive as the Sun but less than one percent as bright. It shines simply because it's still hot.

Canis Major's second-brightest star is Adhara. It is well below Sirius, in one of the dog's legs. It is about 425 light-years away. It emits about a thousand times more visible light than Sirius does, so if it were moved to the same distance as Sirius, it would look about 200 times brighter than Sirius does. Because the surface of Adhara is extremely hot, the star emits more ultraviolet energy than visible light. If our eyes were tuned to the ultraviolet, Adhara would outshine every other star in the night sky.

One interesting sight in Canis Major is a star cluster known as M41, which is about 2,300 light-years away. It's visible to the unaided eye as a faint smudge of light below Sirius. Binoculars or a small telescope reveal a swarm of several dozen stars.