Although it is one of the constellations of the zodiac, Cancer plays a relatively small role in both sky and skylore. 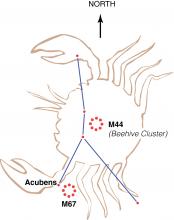 It is a small constellation of faint stars, so it is difficult to find in the sky.

In mythology, it forms part of the story of Hercules. According to one version of the tale, while Hercules was tackling the multi-headed monster Hydra, the goddess Hera sent a giant crab to distract the strongman. Unfortunately for the big crustacean, though, it wasn't much of a challenge. Hercules crushed it, then quickly returned to his monster killing. Hera placed the remains of the crab in the sky, but gave it only faint stars because of its failure.

The constellation's most prominent feature is the star cluster M44, the Beehive Cluster. It is about 600 light-years away and more than 10 light-years wide. To the unaided eye it looks like a small, fuzzy patch of light -- like a tiny cloud floating through the stars. But telescopes reveal that the cloud is actually a cluster of hundreds of individual stars.

The stars of the Beehive are all members of a big family. They formed at the same time, from the same cloud of gas and dust. The most recent estimates put their age at around 600 million to 700 million years, which makes them four billion years younger than the Sun.

Astronomers deduce M44's age by determining the types of stars it contains and the types it does not. Missing from the cluster are the hottest, brightest, and most massive classes of stars. Such stars burn through their nuclear fuel in a hurry, so they disappear in tens or hundreds of millions of years, placing a lower limit on the cluster's age. 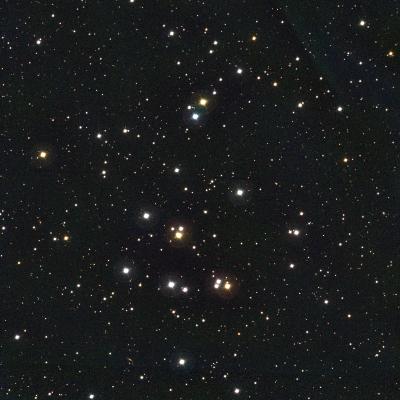 M44, the Beehive clusterMost of the cluster's current members are the faint cosmic embers known as red dwarfs, while about a third are somewhat like the Sun. Only a handful of stars are much brighter and more massive than the Sun, and these will burn out fairly soon on the astronomical time scale.

A much older cluster also lurks with Cancer's borders: M67. It is similar to M44 except for its age, which is about the same as the age of the Sun. Most clusters don't survive more than a few trips around the center of the galaxy because the gravity of other stars and giant clouds of gas and dust pull them apart. Yet M67 has survived for four or five billion years. That's because it resides in the outer part of the galaxy, where there are fewer stars and gas clouds to disturb it.

One other resident of note is the planetary system 55 Cancri. It consists of five known planets, with perhaps several more awaiting discovery.

The system is about 40 light-years away, and is faintly visible to the unaided eye, although you need help to find it. It consists of two wide-spaced stars, one of which is similar to the Sun, and which hosts the planets. The innermost of its planets is a "super Earth," which means it's only a few times heavier than our world -- one of the lightest-weight planets yet discovered. The other planets are much bigger and heavier. None of the planets is in the star's habitable zone, which is the distance from the star at which liquid water could exist on the surface. Since water is a necessary ingredient for life as we know it, none of the planets is considered a likely abode for life.