A black hole is invisible, but astronomers can detect it because its enormous gravity grabs nearby matter.

If the Sun were compressed to a diameter of just four miles (6 km), its escape velocity would equal the speed of light -- 186,000 miles (300,000 km) per second. Since nothing can travel faster than light, no matter or energy could escape its surface.

Albert Einstein's theories of relativity say that, in this situation, the Sun's mass would be helpless to resist the pull of gravity. In just a couple of seconds, it would collapse to a central point of almost infinite density, known as a singularity. This point would retain the Sun's mass, though, so its surface gravity would grow almost infinitely strong. Out to a distance of about two miles from the center, this gravitational pull would be so strong that nothing could escape from it -- not even light. This distance, which is proportional to the mass of the object, is called the Schwarzschild radius or "event horizon." Since everything inside this horizon is lost to the outside universe, such an object is called a black hole.

Such is the fate of some of the heaviest stars in the universe. When a massive star dies, its core collapses to form a neutron star -- an ultradense ball as massive as the Sun but no bigger than a city. If enough material piles onto the neutron star to push its mass to between two and three times the Sun's, though, it will collapse even farther to form a black hole. The star's outer layers are blasted into space, forming a supernova. A supernova in which a black hole is formed also is accompanied by an intense outburst of gamma rays, which may create an object known as a gamma-ray burst.

The structure of a black hole A black hole is invisible, but astronomers can detect it because its enormous gravity grabs nearby matter. Infalling matter spirals in through a flat, rotating "accretion disk." The material near the horizon orbits at almost the speed of light, and friction in the disk heats the gas to high temperatures, producing X-rays. Special telescopes in Earth orbit have detected these outbursts of X-rays. Some involve neutron stars, but others are too massive to be neutron stars, and the only known alternative is a black hole. One of the most famous is known as Cygnus X-1, which has a black hole about 10 times as massive as the Sun.

If we tried to hover just outside a black hole's horizon, with a rocket of enormous power, we would be crushed by an acceleration equal to about a trillion times the gravity at Earth's surface. We could try to avoid these forces by falling into orbit around the black hole, beyond the horizon. We would still be destroyed, though, by the tidal gravitational forces, which pull more strongly at the side of an object closest to the black hole than the side farthest from it.

If we could send robots built of infinitely strong materials near the hole, other strange phenomena would occur. Their clocks would seem to run slow as seen by a distant observer. The wavelengths of any light or radio waves they sent to us would be stretched, too.

Is there a black hole at the center of the Milky Way?

Yes. Supermassive black holes appear to inhabit the cores of most large galaxies, including the Milky Way. 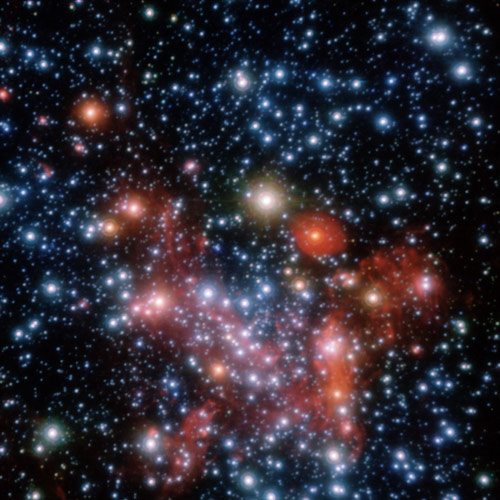 The Milky Way's black hole is fairly puny, however. It is about 3 million to 4 million times as massive as the Sun. The largest black holes yet discovered are at least 1,000 times more massive than that.

The black hole won't "suck in" the rest of the galaxy. While it may eventually pull in stars and gas clouds that are close to it, the Sun and the other stars out in the galactic suburbs will remain in their distant orbits, far outside the black hole's grasp.