Auriga, the celestial charioteer, has neither chariot nor horse. Instead, he's drawn as a man holding the reins in his right hand, with a goat on his left shoulder — the star Capella — and two baby goats in his left arm. Look for him cruising high across the southern evening sky in January and February. 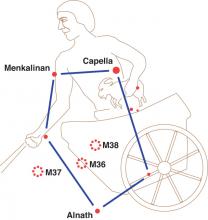 The constellation has an uncertain origin. It might represent Neptune rising from the sea in a chariot. Or it might honor a legendary king of Athens; according to this tale, he invented a chariot that was drawn by four horses.

Capella is one of the few bright stars that is yellow, like our Sun. The similar color indicates that they have roughly the same surface temperature. But the light from Capella actually comes from two separate stars. Both are yellow, and both lie about 43 light-years from Earth. Each star emits dozens of times more light than the Sun.

Its brightness and position in the night sky have made Capella an important star in many cultures. An example is the ancient Mexican city of Monte Alban, where a temple was dedicated to astronomical observations. Some of its structures were aligned with the point on the horizon where Capella made its first dawn appearance. That appearance happened on one of the two days of the year when the Sun passed directly overhead. So Capella might have acted like a warning flag, alerting the city's leaders that the time for the year's most important ceremonies was at hand.